I hope everyone had a great Valentine's day. On Saturday morning this is what I woke up and saw next to me... 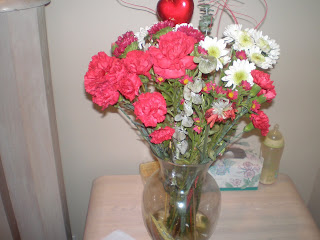 I was so excited. I love getting flowers. That morning my parents made everyone a really nice breakfast that included pink heart shaped pancakes, hashbrowns, chocolate covered strawberries and juice. It was so delicious. After breakfast my family just hung out and we all watched a movie. That night Ryan and I were able to go out and do something which I was very excited about because we hadn't been out in a while. My parents and Michael and Sarah were home so they said they would watch Blake for us. (Thank you so much guys!!!) Ryan didn't tell me where we were going so it was a total surprise. We first stopped and got hot chocolate which is kind of a traditon of ours. Then he took me ice skating. It was so much fun and I had not been ice skating for so long. It took us a little bit to feel comfortable but pretty soon we were going at normal speed. Ha Ha... I am proud to say that neither one of us fell the whole night that we were there. Here are some pictures of us ice skating.... 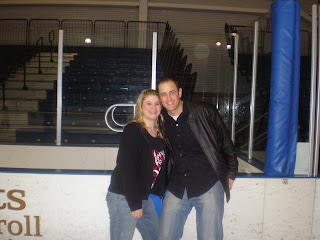 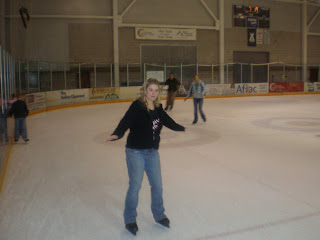 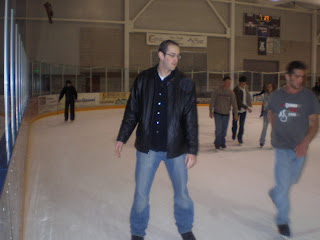 When we left the rink our car had been covered by the snow. 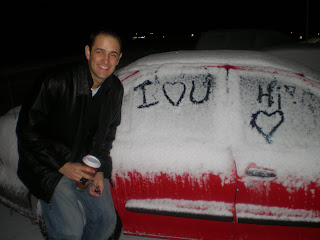 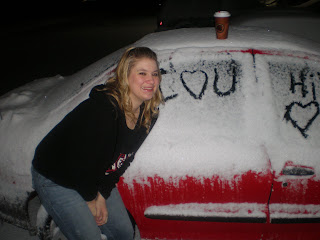 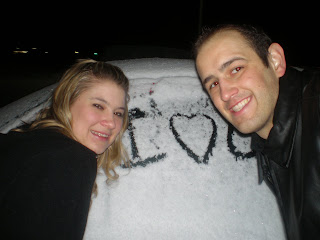 After ice skating we came home and ate some pizza for dinner which was delicious. Then we played a game with my parents and Michael and Sarah. After the game Ryan and I decided to exchange gifts. This year I decided to make Ryan's gift to save a little money. I am very impressed with how it turned out and Ryan loved it. Here it is.... 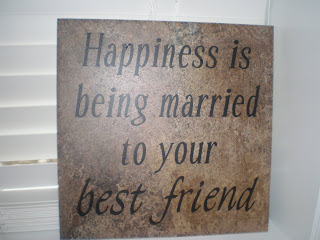 After I gave Ryan his gift he gave me mine... Every Valentines day Ryan has given me a stuffed animal and I love them so much. Also he got me the biggest box of chocolate's that I have every seen. It was amazing. You can never go wrong with chocolate. 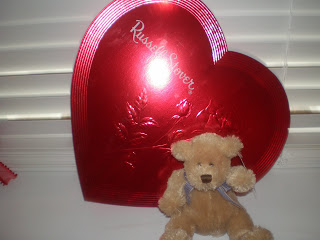 Well, I hope everyone had a great day and were with the one's you love!!!!

Tuesday was Blake's first birthday. How time flies. It seems like it was just yesterday that we were bringing him home from the hospital but it also feels like we have had him forever. How he went from this....... 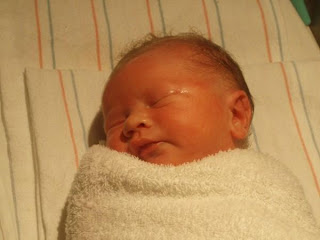 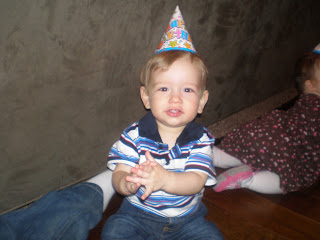 I have no idea. Blake is such an amazing part of mine and Ryan's lives. We love him so much and can't imagine what we would do without him. He is such a boy already and loves his daddy so much. He is learning so much every day and it amazes me how much he can do. This past couple of months Blake has learned to do so much. He loves to pull himself up to standing positions and is starting to cruise around furniture. He isn't quite sure about the walking part yet but he knows how to get to where he is going quicker than I can notice that he is gone. I don't know what my life would be like without him. I love when he looks up at me and smiles so big that it makes me want to cry. I love when he gives me sloppy wet kisses and when he snuggles down in my arms and we stare in each other's eyes. I love being his mother and can't ever remember not having him when it has only been one short year. He keeps me busy and I love it. He is such a blessing in my life and I love him so much.
For Blake's birthday we had a little party for him on Saturday. We had Grandma and Grandpa Orme, Michael and Sarah, Jill , Matthew and Great Grandma Kircher from my family. Then Matt and Angie (Ryan's brother and wife) and Matt and Kali (Ryan's best friend and his girlfriend) both came from Rexburg to celebrate with us. We also had my friend Molly and her husband and baby come over. We had pizza for dinner, opened presents and gave him his birthday cake. Blake's birthday cake this year was so fun to make. I have made cake before but never like this. I have never made a themed cake or really even decorated one much but I do have to say that it turned out so cute. 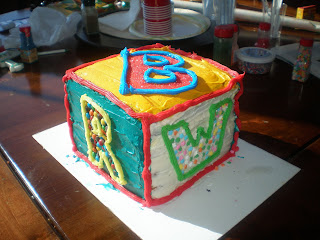 Needless to say Blake was a pro at eating the cake. We gave his a very large piece and he ate it all. He was such a mess after but it was definitely worth it to see. It was such a fun night and I am so happy that everyone came to celebrate with us.
On Tuesday which was his real birthday, we got up and took Blake to get his pictures done. We ended up recreating a pose that we had done at the same place when he was 3 months old. It turned out so cute. Then that night I made him and everyone else pancakes for dinner because that is one of his favorite foods. It was a good day and I wish he would have known that it was his birthday. Here are some pictures of the party and his birthday. Hope you enjoy!!! 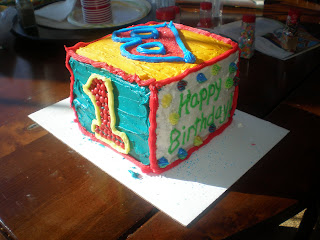 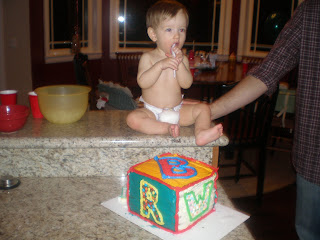 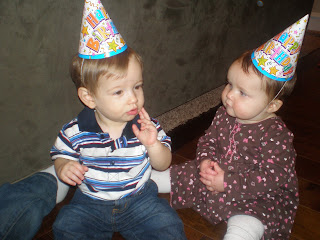 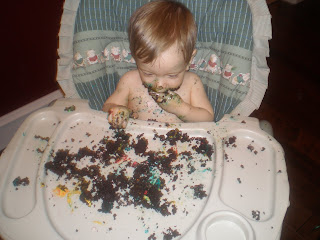 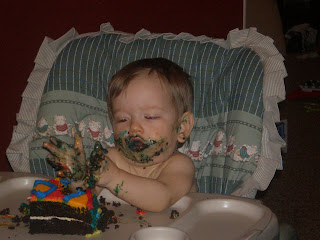 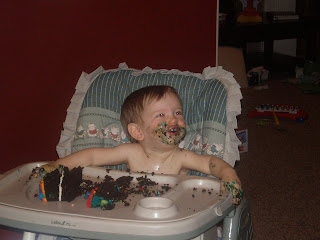 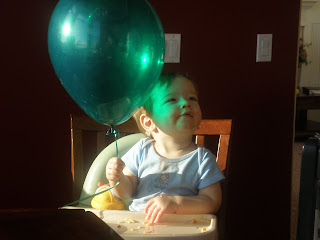 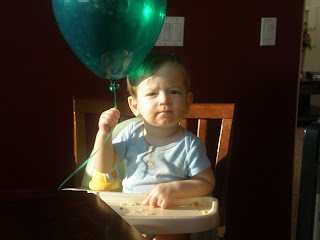 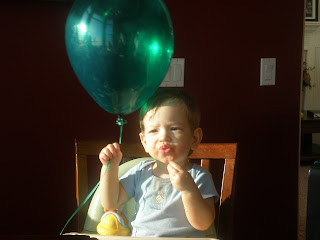 A week ago Ryan, Blake and I drove up to Salt Lake to be with his family for his grandma's 90th birthday party. Neither one of Ryan's grandma's have seen Blake before so we were very excited to go and have Blake meet his great grandmothers. We drove up on Friday afternoon and went to grandma West's house. She had never seen Blake before so it was fun to see them play together. 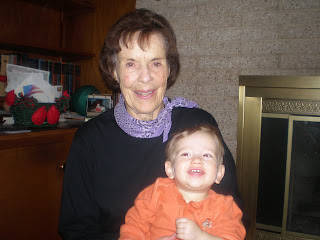 We then waited for the rest of the family to show up. We then went to visit one of Ryan's cousins and then came back and had pizza for dinner. After dinner we went to Aunt Patty's house to spend the night.

The next day we woke up and hung out at the house for a while. I made pancakes for everyone (funny story but too embarrasing to tell) and they were delicious. We then all got ready for the day and left to go to Grandma Hansen's 90th birthday party. We had a good time and I got to meet a lot of people on his side of the family that I had never met before. Also, Blake got to meet his Great Grandma Hansen. She was so cute when we put Blake on her lap. It was so great to see them together and I made sure that I got lots of pictures of them together. 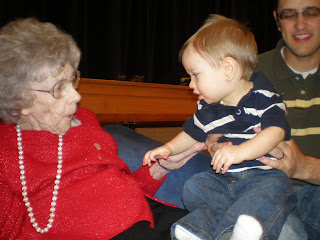 After the party there was a family reunion that we had at the church. I met a lot of new people and even met Ryan's mom's cousin who used to baby-sit my dad and was great friends with my grandparents. (small world I know) After the reunion we went back to Aunt Patty's house and hung out for a while before going to bed.
The next morning we got up and ready and went back over to Grandma West's house for breakfast. She had all of her children, grandchildren and great-grandchildren come over and she made a wonderful breakfast for us all. I met even more of Ryan's cousins that I had never met before. It was so much fun to have to whole family together.
After breakfast it started to snow pretty hard and we decided it was time to drive home so we could beat the storm. Half of the drive was pretty scary due to the snow and rain but we got back to Logan safely and were very grateful.
We had such a great time in Salt Lake and a great time with family. I am so happy that Blake was able to meet two of his great-grandma's (he still has all 4 which is awesome). We definitely made memories that will not be forgotten. I love when this side of the family gets together because we have so much fun. Here are some picures of the weekend. 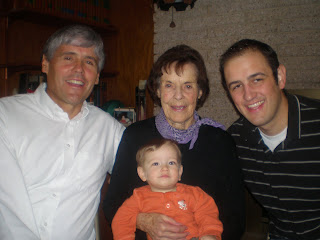 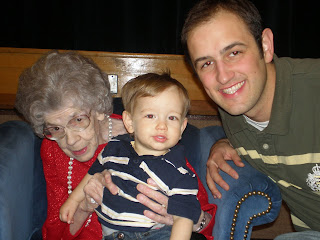 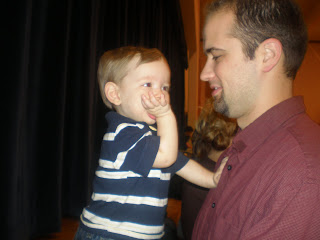