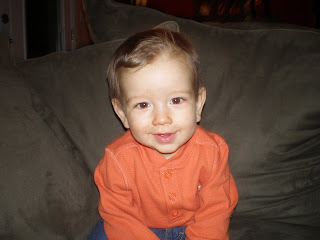 Sorry this post is so late. This thanksgiving we were able to fly to Logan, Utah to be with my family. We were so excited because Ryan's brother Matt and his wife Angie and their son Dallin were able to join us also. They came from Idaho and were able to stay a few days with us.
We flew in Wednesday night and Blake did so much better on the plane than his first plane trip. We drove to Logan which is about 1 1/2 hours from Salt Lake and got to my parents house about 10:30 that night. We ate dinner and visited all night while Blake and his little cousin played with each other. It was so good to see everyone and to have a little friend and cousin for Blake. The next few days flew by so fast. We stayed up every night and just played and talked with everyone. On Thanksgiving morning my dad and all the kids went and had a turkey bowl at the high school with some of the family friends. It was a lot of fun and good exercise before we ate dinner. Thanksgiving dinner was amazing as always and I have to give props to my mom and dad, Aunt Karen, and Grandma for the food. Also Sarah who made amazing cheesecake and Apple pie that was soooooooo good. I ate way to much but it was so worth it.
My parents completed the theater room in their new house which is so cool. It is definatly better than any theater that I have ever been in. We watched football, played the Wii and Wii fit and watched movies everyday. I am so grateful for the best family ever. My parents are amazing and take care of my little family. They are always there for me and are so caring. I am so grateful for the family that I married in too. They are amazing and I could not ask for better in-laws. I love them so much.
I was having so much fun that I forgot to take a lot of pictures but here are some cute ones of Blake and his cousin Dallin. My mom bought them matching outfits for the pictures. You can't really tell from the pictures but they look so much alike in person. It really is so weird to see how similar they are in their mannerisms, sounds they make, and how much they look alike. Dallin is 9 months older than Blake. They could definatly pass for brothers. 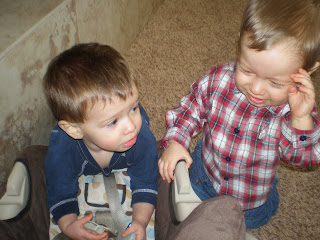 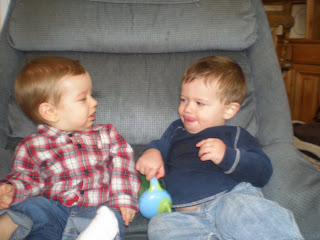 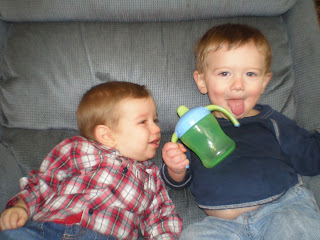 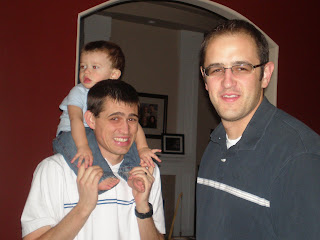 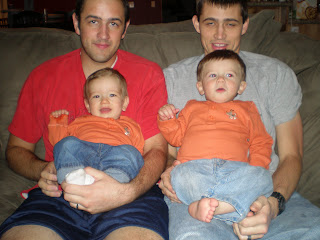 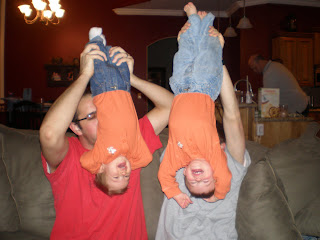 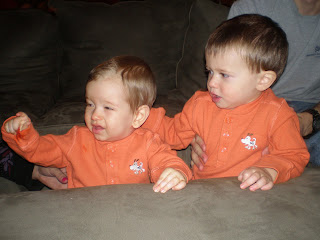 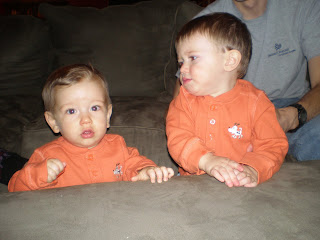 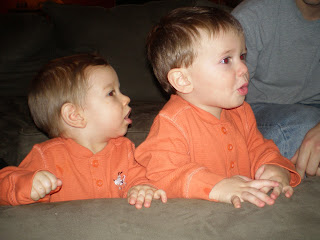 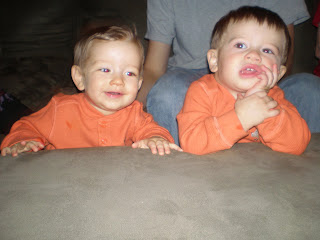 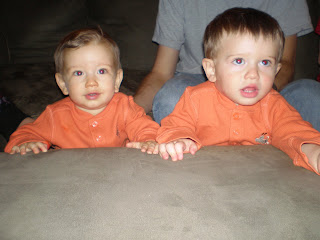 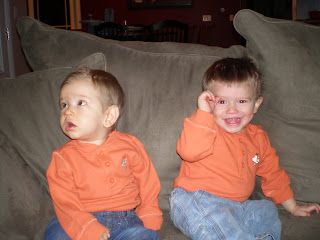 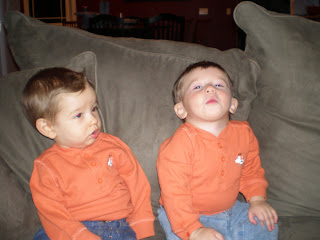 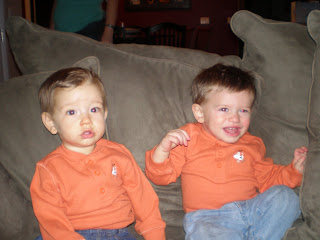 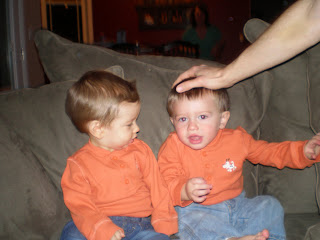 We were so sad when it was Monday morning and we had to leave for the airport for our flight. Little did we know it would be a very long day. Right before we left I got a call from the airline saying that our flight was delayed from 1:35 to 3:40. We still had to take Aunt Karen to the airport because her plane left and 1:05. We then got a call that our plane was now changed to 3:00. We left and drove the 1 1/2 hours to the airport. We got to the airport and dropped my Aunt Karen off. My mom then took us to lunch and we talked until we had to go back to the airport. We said goodbye to my mom and went to check in. We went through security which is such a pain with a baby. First I had to take my shoes, belt and sweater off. Then I had to take Blake's shoes off (who would hide something in baby shoes????) I had to take Blake's little sweater off. We then had to fold up the carseat and sent it through the conveyer belt and walk through the metal detector only to have to put everything back on which took another ten minutes. Then a security guy came up and took Blake's sippy cup that had apple juice in it out of the bag and said that he had to go test the liquid in it to see what it was. WHAT??????? So then once we were cleared and all dressed and got Blake's juice back we started walking to our gate that was at the very end of the airport. At this time is was about 2:00 which is half an hour later from when we were originally supposed to have been on the plane. Before we walked to the terminal I checked the board that had departing flight times to make sure we were still good for 3:00 departure. To my horror I saw our flight number and the time on the board said 1:35 and at the gate. HOLY MOLY!!! They changed it back and we were late. Ryan and I started sprinting down the long hallway with Blake in our arms to get to the very last gate to try to catch our flight. When we finally reached the gate we realized no one had boarded yet. WHAT was going on? I went to the desk and asked what was going on and told the guy that the board said the plane was at the gate and the departure time was at 1:35. He said, Oh, I'm sorry, the plane still leaves at 3:00. We don't control those boards and what they say. By this time I had to sit down to catch my breath. The airline gave us each a 7 dollar voucher for dinner and told us to take a seat. At about 3:30 the flight guy got on his little microphone and said, "I'm sorry ladies and gentlemen. The plane has a maintenance problem. Unfortunately the maintenance men can not find it. The plane is now delayed until 5:00 pm. GRRRRR!!! We sat there for another half hour and I told Ryan that I was not comfortable flying on a plane that has something wrong and they don't know what it is after hours of trying to fix it. Then the microphone came back on and said, "I'm sorry they still don't know what is wrong. We will try putting you passengers on other flights to Vegas from other airlines or you can stick around and wait for the plane that may or may not take off today. By the time he was done speaking the line was out of control and I was trying to pick Blake up to go get in line but it was useless. We continued to wait and Blake was so tired. A few minutes later the microphone said that all flights were full and overbooked and that we could try to get standby tickets or reschedule for Tuesday. I was getting so mad. Blake was tired and I knew we couldn't wait there any longer for a 5% chance that we might get onto a different plane. I went and stood in another line for 30 minutes to see what I could do. I ended up getting tickets for Tuesday night at 7:45 pm. I called my mom who was on her way back to Logan and she turned around and came to get us. That night when we finally got back to my parents house by dad called the airline and told them what had happened and the airline gave us two free round trip tickets to anywhere in the US. (THANKS DAD) We spent the day on Tuesday playing and then that night drove another 1 1/2 hours back to the airport. We had to go back through security which took longer this time because we had the stroller and finally got on our plane and got home last night at about 9 pm which is only 31 hours after we were supposed to get home originally. What a day!!!!!! At least Blake did well on the plane and loved looking out the windows.
That was our exciting day at the airport. I am thankful that we did get home safely and that we were able to spend another day with my family. Hope everyone else had a great holiday.

Wow! You did have quite the experience at the airport - thats really cool that you got 2 free tickets out of it though! Where you gonna go? Blake is getting so big I can't believe it! We HAVE to get together - we are all doing better!

Glad your back safe. I always take it for granted when things go right on a flight. I hate airport delays, they are the worst. I'm glad you at least got something good out of all that.